Disputes in the cavern

If Ignatius Loyola been a child of the late 20th century, it is quite likely that he would have chosen palaeoanthropology as a career rather than theology, seeing as he was so predisposed to casuistry. When I innocently asked a vertebrate palaeontologist who specialized in the Pliocene and Pleistocene Epochs why it was that students of hominins were so prone to controversy, his answer was revealing: ‘They don’t have many fossils’. One place where there are lots of hominin fossils, in fact the largest known sample of them, is the Atapuerca cavern in northern Spain. At the deepest level of the cave system there is a veritable charnel house containing the remains of at least 28 individuals. Because there are bones from all parts of the human anatomy, some have suggested that the cache is one of deliberate burial, but there is a disturbing dearth of the smaller bones of feet and hands. Consequently, other voices claim that the bodies were washed in by floods, losing extremities en route – though that view would be easily tested using other signs of trauma on large bones. Yet that is a minor quibble compared with one that is developing around the age of the boneyard and the taxonomy of the cadavers in it (http://www.guardian.co.uk/science/2012/jun/10/fossil-dating-row-sima-huesos-spain).

The Spanish team responsible for the evolutionary wealth in the entire Atapuerca cave complex, which ranges from almost a million years ago to recent times, assigned the Sima de los Huesos (Pit of Bones) fossils to Homo heidelbergensis. In fact about 90% of all H. heidelbergensis remains are from Atapuerca, so any anatomical dispute over these specimens is a threat to the status of the species itself. One leading authority who does dispute this assignment is Chris Stringer of the UK Natural History Museum, who claims that many of the heads have teeth and jaws with shapes that fall within the range of Neanderthals – supposedly descended from H. heidelbergensis. The age of the deposit is the focus of debate. Were it to be around 400 ka or younger, as early attempts at dating suggested, then the fossils might well be those of Neanderthals for that is early in the range of that species as determined by ‘molecular-clock’ studies of Neanderthal DNA. However, the material most likely to yield a good radiometric age is carbonate speleothem, the stuff of stalactites and stalagmites though more commonly a matrix that binds together old cave detritus. The fossils are undoubtedly far older than the maximum age that can be achieved using the well known radiocarbon method (<60 ka), but speleothem lends itself to a precise dating technique based on the decay series of uranium isotopes. In the case of Sima de los Huesos, the fossils lie in a clay breccia overlain by a layer of speleothem, which has yielded a U-series age of around 600 Ma (Bischoff, J.L. et al. 2007. High-resolution U-series dates from the Sima de los Huesos hominids yields 600 kyrs: implications for the evolution of the early Neanderthal lineage. Journal of Archaeological Science, v. 34, p. 763-770). 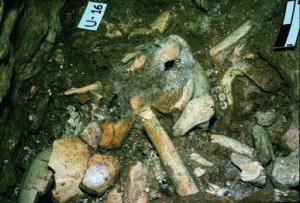 Stringer argues that the hominins’ anatomy is so like that of Neanderthals that, somehow, the radiometric age must be wrong – i.e. “too old” – perhaps because the speleothem is in fact from a 600 ka block that fell onto the fossils after they had accumulated. His view is that they are Neanderthals descended from H. heidelbergensis living in the earlier Pleistocene and which was the common ancestor of both Neanderthals and anatomically modern humans. Bischoff et al. consider the Sima de los Huesos hominids to be ‘at the very beginnings of the Neanderthal evolutionary lineage’, which seems to me to be a reasonable deduction from both stratigraphic and anatomical data. To demand that they must be at least 200 ka younger, apparently on the basis of an estimate of Neanderthal origination from DNA data seems less reasonable. The appearance of Stringer’s detailed arguments  in Evolutionary Anthropology (v. 21(3)) is eagerly awaited, following the Observer’s take on his position.

Another area in which controversy is brewing – and has been for decades – is that of the origin of human artistic culture. One of the gem-boxes of early art is the Geissenclösterle (monastery of the goats) cavern in southern Germany, in which have been found various figurines made of bird bone and ivory, including a celebrated lion-man theriomorph, highly exaggerated female figures, flutes and beads. They belong to the Aurignacian culture brought by the earliest anatomically modern Europeans who diffused westwards along the Danube from the near-East as early as 45 ka ago. The layer containing the artifacts was originally dated at about 35 ka, but new radiocarbon techniques have been tried on bone with cut marks, among other materials (Higham, T. et al. 2012. Testing models for the beginnings of the Aurignacian and the advent of art and music: the radiocarbon chronology of Geissenclösterle. Journal of Human Evolution, v. 62, p. 664-676 doi:10.1016/j.jhevol.2012.03.003) and found to yield a much older age of 42.5 ka, close to the oldest European date for modern human occupation 43-45 ka for the stratigraphically older Uluzzian tool industry.

The date is also considerably earlier than the demise of the Neanderthals and raises the issue of modern-Neanderthal contacts. Indeed the layer below that assigned to Aurignacian contains tools made by Neanderthals, whose age is statistically indistinguishable from the later occupation level. The Chatelperronian tool industry, which closely resembles the Aurignacian but is ascribed to Neanderthals, is supposed to be around 40 ka old, but the advanced radiocarbon technique that yielded much older ages for Geissenclösterle apparently has not yet been deployed on this culture. On the basis of limited age data, it does seem likely that Neanderthals adopted the new technology after they encountered it. The Aurignacian artistic products are vastly more advanced than any found at older sites in Africa.

In the context of the debate about modern human and Neanderthal cognitive abilities, which suggests the former were altogether smarter and more creative, there is an unvoiced or at least unheeded argument. Whether or not Neanderthals originated artifacts that were ‘modern’ for their time or copied them is not as important as the fact that this group, previously isolated for up to 400 millennia, were able to appreciate and learn these novelties. That is much the same as people living today, in Australia for instance, a couple of generations from hunter-gatherer origins, working on production lines, piloting aircraft, social networking and creating world-class abstract art. What did they, and the Aurignacians, produce from other materials that have not survived decay; ditto for any pre-45 ka humans? Another point rarely raised, but surely valid, is that previous people may not have felt any need to produce art in forms that survive for tens or hundreds of millennia. Forty-odd thousand years ago, climate was undergoing rapid ups and downs of temperature and humidity in the run-up to the last glacial maximum. Conditions at mid-latitudes would have been much more changeable than those of the tropics. Both anatomically modern humans and Neanderthals faced the same attendant ecological changes, and as co-occupants of southern Europe they faced each other as rivals for available resources. Finally, Aurignacians hailed from the east, also Neanderthal territory and severely affected by rapid climate change from around 80 ka; so did they bring with them a culture formed elsewhere? Europe concentrates palaeoanthropologists and their endeavours, while much of the planet to which humans diffused from Africa – and Africa itself – are grossly under-investigated by comparison: ideas will undoubtedly change drastically as these areas get the attention they deserve.

Controversy is not a problem. Indeed, with imperfect, inadequate or ambiguous data it is unavoidable, and heated disputes spur the search for more information that can help resolve ideas or change them. What cannot be sidestepped is the potential for havoc that may arise with new and improved methods. In both cases outlined here radiometric dates have thrown the proverbial spanner into the works. The method used in the Geissenclösterle cavern was designed to remove younger contaminating material from samples for radiocarbon dating and inevitably tends to push 14C dates further back in time. By removing a source of inaccuracy it highlights the inadequacies of dates obtained by earlier approaches on which a great deal of current archaeological thinking relies. Just how much younger contamination is present in a sample only emerges after the improved dating: it may be absent but an be substantial. So, until materials dated by earlier radiocarbon methods are re-run using the new approach neither their absolute ages nor their relative sequence in time can be considered reliable.

Results from just such an advance in radiometric dating of cave deposits in northern Spain will really cause a stir, when they sink in (Pike, A.W.G. and 10 others 2012. U-series dating of Paleolithic art in 11 caves in Spain. Science, v. 336, p. 1409-1413). The U-series method used at the University of Bristol by the joint British-Spanish collaborators dates calcite deposits on painted cave walls, including those at the famous Altamira site. This  ‘flowstone’ may underlie artwork or may have grown over it after its completion, giving maximum or minimum ages for the painting, respectively. If a work has flowstone underneath and as a coating, dating potentially ‘brackets’ a possible age range. The superb figurative depictions of various prey animals, such as bison in Altamira cave, turn out to have been painted at around 18 ka, during the last glacial maximum. However a lot of the art there is abstract, such as hands picked out by red pigment presumably sprayed onto the wall from the artist’s mouth, various stippled discs and dots. Many of the abstracts are beneath flowstone that is around twice as old as the more familiar objects and range in age from 34 to 41 ka, thereby being close in time with the Geissenclösterle materials. Like them, their ages may coincide with the arrival of the earliest anatomically modern Europeans, but they are also towards the end of the period when Neanderthals were still present in much of Europe, including northern Spain. It cannot be ruled out therefore that the earliest paintings were Neanderthal symbolic art.

One response to “Disputes in the cavern”