Traces of the most ancient Britons

Perhaps the most evocative traces of our ancestors are their footprints preserved in once soft muds or silts, none more so than the 3.6 Ma old hominin trackway at Laetoli in Tanzania, discovered by Mary Leakey and colleagues in 1978. Such records of living beings’ activities are by no means vanishingly rare. In 2003 footprints of Neanderthal children emerged in volcanic ash that had formed on the slopes of an Italian volcano. The fact that the tracks zig-zagged and included handprints seemed to suggest that the children were playing on a tempting slope of soft sediment, much as they do today (see The first volcanologists?   and Walking with the ancestors). The muddy sediments of the Severn and Mersey estuaries in England yield younger footprints of anatomically modern humans of all sizes every time tidal flows rip up the sedimentary layers. Now similar examples have been unearthed from 1.0 to 0.78 Ma old Pleistocene interglacial sediments at a coastal site in Norfolk, England, in which stone tools had been found in 2010 .

A team funded by the Pathways to Ancient Britain Project, involving scientists from a consortium of British museums and universities, rapidly conserved a 12 m2 surface of laminated sediments fortuitously exposed on the foreshore at Happisburgh (pronounced ‘Haze-burra’) by winter storms. It was covered in footprints (Ashton, N. and 11 others 2014. Hominin Footprints from Early Pleistocene Deposits at Happisburgh, UK. PLoS ONE v. 9: e88329. doi:10.1371/journal.pone.0088329). Analysis of the prints suggested a band of individuals who had tramped southwards across mudflats at the edge of an estuary. They were possibly members of an early human species, known as Homo antecessor, skeletal remains of whom are known from northern Spain. The Happisburgh individuals were of mixed size, probably including adults and juveniles: three footprint sets suggested 1.6 to 1.73 m stature; nine less than 1.4 m. 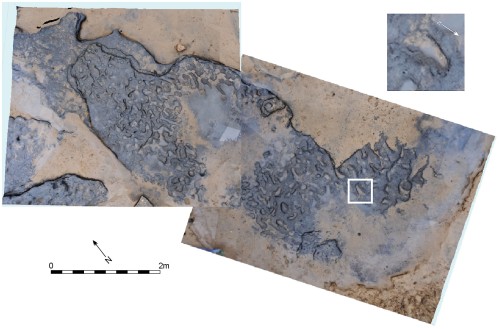 View from above of the well-trodden trackway at Happisburgh, with an enlarged example of one of the foot prints (credit: Ashton et al. 2014 PLoS1)

From pollen samples, East Anglia during the interglacial had a cool climate with pine, spruce, birch and alder tree cover with patches of heath and grassland. That it had attracted early humans to travel so far north from the Mediterranean climate where skeletal remains are found, suggests that food resources were at least adequate. It is hard to imagine the band having been seasonal visitors from warmer climes further south. They must have been hardy, and from the stone tools we know they were well equipped and capable of killing sizeable prey animals, bones of which marked by clear cut marks being good evidence for their hunting skills.

One response to “Traces of the most ancient Britons”