Despite the lingering public image that Neanderthals were not as bright as fully modern humans some had significantly larger brains than we do, albeit with most of the difference being in the rear part of the brain region. So they may have had different powers, such as enhanced vision and awareness of position (proprioception). Because there are few cranial fossils of immature Neanderthals and, for them, little evidence of ages, not much is known about how they developed from birth. A common assumption has been that because their brain was larger post-natal development much have been faster than in modern humans. Set against our slow post-natal development and the faster pace in chimpanzees this assumption has been used in support of limited Neanderthal cognitive abilities. 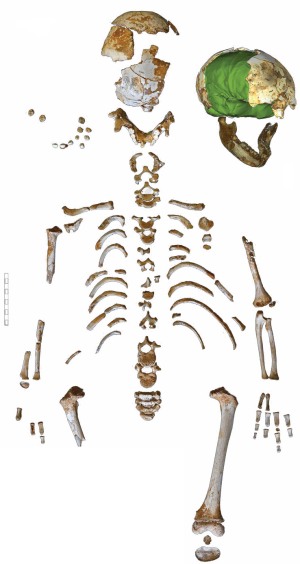 The El Sidron cave in Asturias region of northern Spain has yielded fossil remains of a dozen Neanderthals dated at between 49 and 37 ka, the time when anatomically modern humans were also present in Europe. They are among the best studied examples of this human group. Three were of boys, the best preserved of whom is estimated to have died at 7.7 years old from analysis of his dental development (Rosas, A. and 10 others 2017. The growth pattern of Neandertals, reconstructed from a juvenile skeleton from El Sidrón (Spain). Science, v. 357, p. 1282-1287; doi:10.1126/science.aan6463) Analysis of signs of the maturation stage that he had reached, including that of his brain, show no fundamental difference from modern human juveniles in his overall pace of growth. Other workers have found that a similarly aged Homo erectus boy from Kenya had indeed developed more quickly than modern human juveniles.

It’s not much to go on, but the El Sidron boy supports the view that Neanderthals were not much different from us.

You can find more information on migration of modern humans here.

This entry was posted in Anthropology and Geoarchaeology and tagged Anatomically modern human, Juvenile development, Neanderthal. Bookmark the permalink.