Most volcanic activity stems from the rise of hot, deep rock, usually within the mantle. Pressure suppresses partial melting, so as hot rock rises the greater the chance that it will begin to melt without any rise in its temperature. That is the reason why mantle plumes are associated with many volcanic centres within plates. Extension at oceanic ridges allows upper mantle to rise in linear belts below rift systems giving rise to shallow partial melting, mid-ocean ridge basalts and sea-floor spreading. These aren’t the only processes that can reduce pressure to induce such decompression melting; any means of uplift will do, provided the rate of uplift exceeds the rate of cooling at depth. As well as tectonic uplift and erosion, melting of thick ice sheets and major falls in sea level may result in unloading of the lithosphere.

During Messinian Stage of the late Miocene up to 3 km of evaporitic salt was deposited in the deepest parts of the Mediterranean Basin. One mechanism might have been faster evaporation of seawater than its resupply from the Atlantic through the Straits of Gibraltar, similar to the way in which salts is deposited below the Dead Sea. But the salt layer beneath the modern Mediterranean Sea bed has interleaved riverine sediments containing fossils of land plants. The Straits had closed and the Mediterranean Sea evaporated away. From about 6 to 5.3 Ma ago sea level fell by 3 to 5 km, only returning to normal when the Straits reopened to launch the huge Zanclean flood, with which the Pliocene of southern Europe and North Africa commenced. A team from the Universities of Geneva, Orleans and Paris and the Instituto de Ciencias de la Tierra Jaume Almera in Barcelona has tested the hypothesis that the Messinian Crisis affected volcanic activity in the area (Sternai, P. et al. 2017. Magmatic pulse driven by sea-level changes associated with the Messinian salinity crisis. Nature Geoscience, v. 10 online; doi:10.1038/ngeo3032).

From the record of salt precipitation, Pietro Sternai and colleagues, reckon that the main phase of unloading of the Mediterranean Basin began at around 5.6 Ma. Allowing for loading by the thick evaporites they calculated that the effect of the loss of water mass was equivalent to an unloading of 15 MPa in the deeper Eastern Mediterranean and 10 MPa in the west. Using standard pressure-temperature melting curves for the upper mantle, they then estimated that any magma chambers affected by the decrease in pressure could yield up to 17% more melt. Radiometrically dated lavas and igneous dykes within the Mediterranean region became more frequent and the number of events more than doubled during the time of main salt deposition. 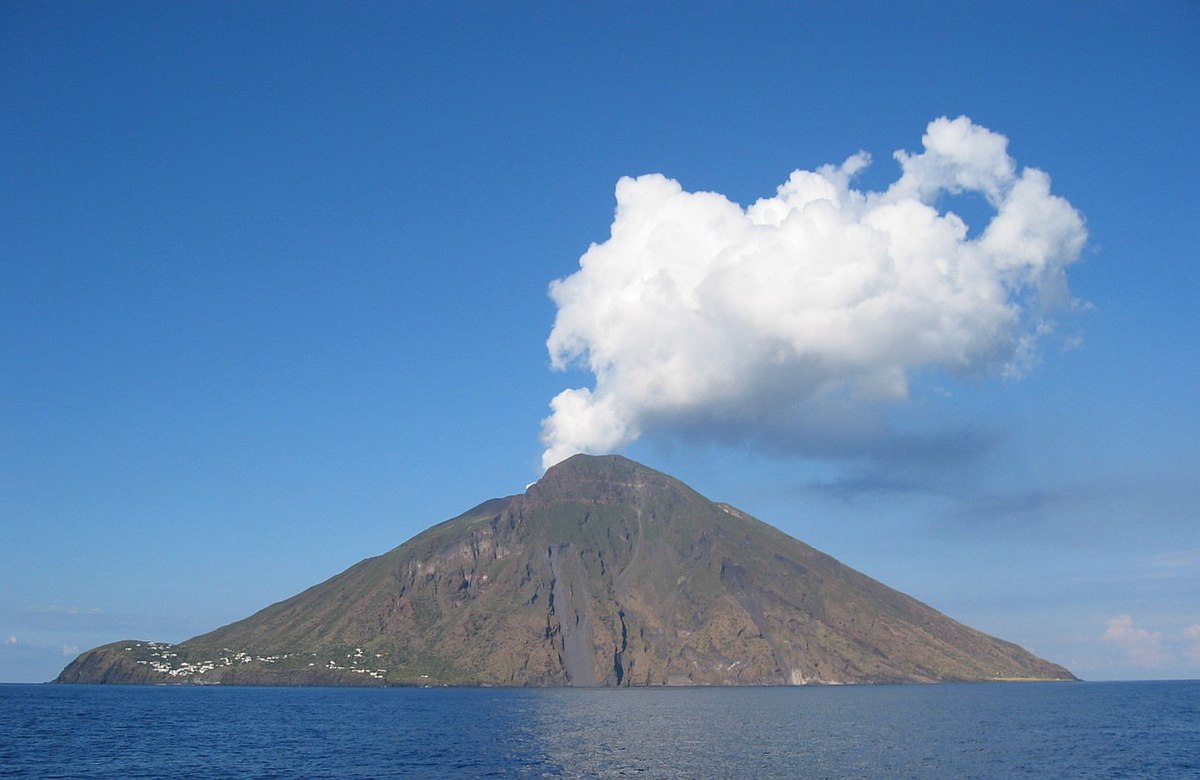 Stromboli, one of the most active volcanoes in the Mediterranean Basin (credit: Wikipedia)

In May 2017 a study of subglacial volcanoes in West Antarctica based on radar mapping of the solid surface identified 138, 91 of them previously unknown (van Wyk de Vries et al. 2017. A new volcanic province: an inventory of subglacial volcanoes in West Antarctica.  Geological Society, London, Special Publication 461) They lie within a buried rift system and are covered by thick ice. Only one volcano in Antarctica is known to be active, Erebus, which is part of the cluster. Most of the news items stemming from the publication mentioned the possibility that the buried volcanic tract could be adding to the instability of the West Antarctic Ice Sheet through heating up its base. The WAIS is the ice sheet most feared to collapse seawards leading to a rise of about 3 m in global sea level. If the 2 km thick WAIS did slide off its underlying crust it might possibly trigger reactivation of the volcanic cluster.

One response to “Volcanism and sea level fall”