The Great Barrier Reef and the Last Glacial Maximum (LGM)

The 2,300 km stretch of coral reefs and islands in the Coral Sea off the coast of Queensland, Australia is the largest single structure on Earth built by living organisms. The dominant reef builders are four hundred species of coral, most of which are a symbiosis that conjoins marine invertebrates in the class Anthozoa – part of the phylum Cnidaria – and photosynthesising single-celled eukaryotes known as dinoflagellates. These algae are mainly free-living marine plankton, some species of which evolved to be co-opted by corals. Their role in the symbiosis is complex; on the one hand providing energy in the form of sugars, glycerol and amino acids; on the other consuming the coral polyps’ carbon dioxide output. The latter is fixed, in the case of hard corals, by the secretion of calcium carbonate: the key to reef formation.

Marine photosynthesisers demand clear water in the upper few tens of metres of the sea, together with sunlight least affected by the atmosphere, as in the tropics where the sun rises to the zenith year round. The coral animal-algae connection limits reef growth to shallow seas, the top of the reef being close to mean sea level, sometimes rising above it at low tide. Hence the formation of fringing and barrier reefs. In the case of atoll reefs, a connection with sea-floor volcanoes that rose from hotspots on the oceanic abyssal plains to form active volcanic islands that began to sink once they became extinct. The pace at which reefs can grow is generally able to match that of crustal subsidence so that atolls remain throughout the Western Pacific. Reef growth is also capable of coping with global sea-level changes, so that the present top level of the Great Barrier Reef has been in balance with the generally static sea level of the Holocene since the ice caps of the last glaciation melted back to roughly their present extent about seven thousand years ago.

There are many cases of different reef levels on and around islands that match the sea-level fluctuations during the last Ice Age.  High-resolution bathymetry produced by multi-beam sonar across the eastern edge of parts of the Great Barrier Reef reveals a series of submerged terraces down to almost 120 m below modern sea-level (Yokoyama, Y. and 17 others 2018. Rapid glaciation and a two-step sea level plunge in the Last Glacial Maximum. Nature, v. 559, p. 603-607; doi:10.1038/s41586-018-0335-4). Globally, the LGM began at around 31 ka when sea level fell by about 40 metres, thanks to massive accumulation of glacial ice at high latitudes. Previous studies to chart the changes in global mean sea level during the LGM suggested a steady fall until about 20 ka, followed by rapid rise as ice caps melted back. The multinational team led by Yusuke Yokoyama of the University of Tokyo, obtained precise ages of coral samples from different depths in drill cores through the coral terraces. These data revealed a more complex pattern of sea-level change, in particular a hitherto unsuspected plunge between 21.9 and 20.5 ka of 20 m to reach -118 m. This immediately preceded the warming-related rise that continued to Holocene levels. 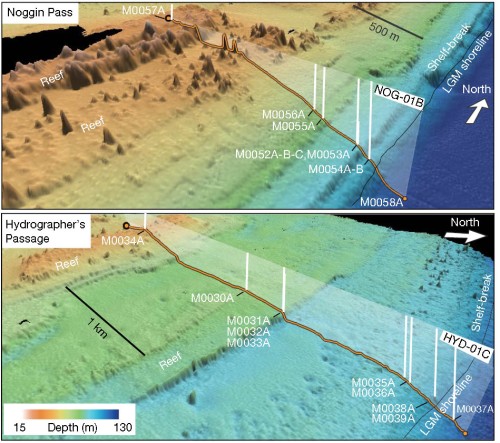 High-resolution sonar images of the sea floor at two sites on the eastern edge of Australia’s Great Barrier Reef. They show terraces associated with, the lowest of which corresponds to the Last Glacial Maximum. (Credit: Yokoyama et al. 2018, Figure 1)

Curiously, this massive phenomenon is not shown by sea-level estimates derived from the records of changing oxygen isotopes in ocean-floor sediments and ice cores. The team’s complex modelling incorporated global changes in land and sea-bed levels, and thus changes in the volume of the ocean basins, due to the changing isostatic effects of both ice-cap and ocean masses. From these it is possible to reach an interesting conclusion (Whitehouse, P. 2018. Ancient ice sheet had a growth spurt. Nature, v. 603, p. 487-488; doi:10.1038/d41586-018-05760-3). Rather than an increase in snowfall onto ice-caps, their retreat may have been hindered by thickening of marginal floating ice shelves that created buttresses around Antarctica and the northern ice sheets. Slowed glacial flow to the oceans could have promoted ice sheet growth for a time as melting of calved icebergs was hindered, especially in the case of the ice sheet over northern North America. Certainly, this crucial climatic turning point was a lot more complex than previously believed.