Oceanic hydrothermal vents and the origin of life

A range of indirect evidence has been used to suggest that life originated deep in the oceans around hydrothermal vents, such as signs of early organic matter in association with Archaean pillow lavas. One particularly persuasive observation is that a number of proteins and other cell chemicals are constructed around metal sulfide groups. Such sulfides are common around hydrothermal ‘smokers’ associated with oceanic rift systems. Moreover, Fischer-Tropsch reactions between carbon monoxide and hydrogen produce quite complex hydrocarbon molecules under laboratory conditions. Such hydrogenation of a carbon-bearing gas requires a catalyst, a commonly used one being chromium oxide (see Abiotic formation of hydrocarbons by oceanic hydrothermal circulation May 2004). It also turns out that fluids emitted by sea-floor hydrothermal systems are sometimes rich in free hydrogen, formed by the breakdown of olivine in ultramafic rocks to form hydroxylated minerals such as serpentine and talc. The fact that chromium is abundant in ultramafic rocks, in the form of its oxide chromite, elevates the possibility that Fischer-Tropsch reactions may have been a crucial part of the life-forming process on the early Earth. What is needed is evidence that such reactions do occur in natural settings. 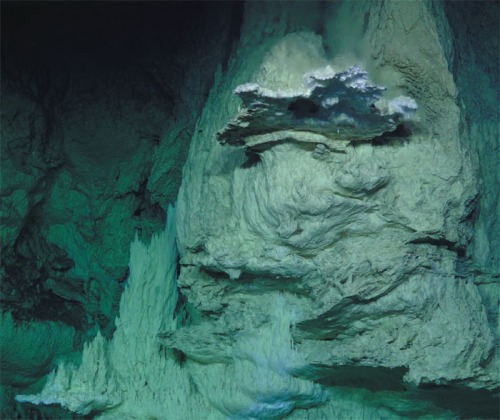 One site on the mid-Atlantic ridge spreading centre, the Lost City vent field, operates because of serpentinisation of peridotites exposed on the ocean floor, to form carbonate-rich plumes and rocky towers; ‘white smokers’. So that is an obvious place to test the abiotic theory for the origin of life. Past analyses of the vents have yielded a whole range of organic molecules, including alkanes, formates, acetates and pyruvates, that are possible precursors for such a natural process. Revisiting Lost City with advanced analytical techniques has taken the quest a major step forward (Ménez, B. et al. 2018. Abiotic synthesis of amino acids in the recesses of the oceanic lithosphere. Nature, advance online publication; DOI: 10.1038/s41586-018-0684-z). The researchers from France and Kazakhstan focused on rock drilled from 170 m below the vent system, probably beyond the influence of surface contamination from living organisms. Using several methods they detected the nitrogen-containing amino acid tryptophan, and that alone. Had they detected other amino acids their exciting result would have been severely tempered by the possibility of surface organic contamination. The formation of tryptophan implies that its abiotic formation had to involve the reduction of elemental nitrogen (N2) to ammonia (NH3). Bénédicte Ménez and colleagues suggest that the iron-rich clay saponite, which is a common product of serpentine alteration at low temperatures, may have catalysed such reduction and amino-acid synthesis through Friedel–Crafts reactions. Fascinating as this discovery may be, it is just a step towards confirming life’s abiogenesis. It also permits speculation that similar evidence may be found elsewhere in the Solar System on rocky bodies, such as the moons Enceladus and Europa that orbit Saturn and Jupiter respectively. That is, if the rock base of hydrothermal systems thought to occur there can be reached.