Denisovan on top of the world

Who the Denisovans were is almost completely bound up with their DNA. Until 2019 their only tangible remains were from a single Siberian cave and amounted to a finger bone, a toe bone three molars and fragment of limb bone. Yet they provided DNA from four individuals who lived in Denis the Hermit’s cave from 30 to more than 100 thousand years ago. The analyses revealed that the Denisovans, like the Neanderthals, left their genetic mark in modern people who live outside of Africa, specifically native people of Melanesia and Australia . Remarkably, one of them revealed that a 90 ka female Denisovan was the offspring of a Denisovan father and  a Neanderthal mother whose DNA suggested that she may have come from the far-off Balkans. Living, native Tibetans, whose DNA has been analysed, share a gene (EPAS1) with Denisovans, which regulates the body’s production of haemoglobin and enables Tibetans and Nepalese Sherpas to thrive at extremely high altitudes (see The earliest humans in Tibet). 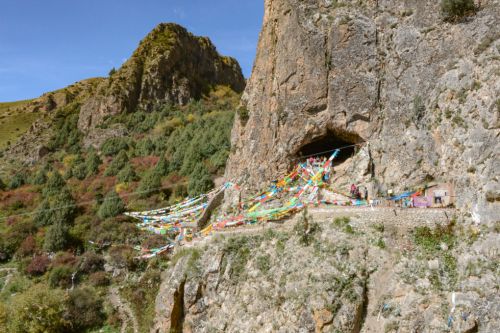 Part of a hominin lower jaw unearthed by a Buddhist monk in 1980 from a cave on the Tibetan Plateau, at a height of 3280 m, found its way by a circuitous route to the Max Planck Institute for Evolutionary Anthropology in Leipzig in 2016. It carries two very large molars comparable in size with those found at the Denisova Cave, and which peculiarly have three roots rather than the four in the jaws of non-Asian, living humans’. East Asians commonly show this trait. This and other aspects of the fossil teeth resemble those of some uncategorised early hominin fossils from China. Dating of speleothem calcium carbonate with which the jaw is encrusted suggests that the fossil dates back to at least 160 thousand years ago, around the oldest date recovered from Denisova Cave; during the glacial period before the last one. So the individual was able to survive winter conditions worse than those experienced today on the Tibetan Plateau. Further excavation in the cave found numerous stone artefacts and cut-marked animal bones (Chen, F. and 18 others 2019. A late Middle Pleistocene Denisovan mandible from the Tibetan Plateau. Nature, v. 569, published online; DOI: 10.1038/s41586-019-1139-x).

Unfortunately the Tibetan Jaw did not yield DNA capable of being sequenced, so the issues of inheritance of the ‘high-altitude’ gene and wider relatedness of the individual could not be checked. However, one of the teeth did contain preserved protein that can be analysed in an analogous way to DNA, but with less revealing detail. The results were sufficient to demonstrate that the mandible was consistent with a hominin population closely related to the Denisovans of the Siberian cave.

No doubt a path has already been beaten to the Tibetan cave, in the hope of further hominin material. To me the resemblance of the Tibetan fossil jaw to other hominin finds in China, including those from Xuchang, summarised here, is exciting. None of them have been subject to modern biological analysis. Perhaps the ‘real Denisovan’ will emerge from them.

This entry was posted in Anthropology and Geoarchaeology and tagged Denisovan, Tibet. Bookmark the permalink.