Read about evidence for petroleum generation and migration through the 1.9 Ga old Gunflint banded iron formation in Ontario, Canada HERE

Posted in Economic and applied geology, Sedimentology and stratigraphy

Extraordinary evidence for an extraterrestrial influence on evolution and climate in the Ordovician. Read the article at Earth-logs here.

Australopithecus anamensis; a face to fit the name

Learn at Earth-logs how the story of hominin evolution has changed significantly after the discovery in Ethiopia of a stunning new australopithecine fossil.

The near-complete cranium of an Au. anamensis found in the Afar Depression of NE Ethiopia. Note the lateral flattening caused by sedimentary burial. (Credit: Cleveland Museum of Natural History)

Symbolic art made by Denisovans (?)

Posted in Economic and applied geology

Read at Earth-logs about how Middle Stone Age humans survived 40 thousand years ago in a high-elevation glacial environment in Ethiopia by roasting giant mole rats. 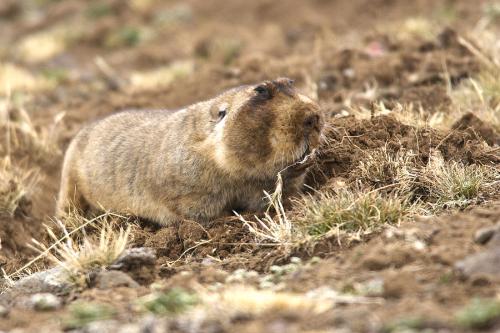 Eclogite: the red-brown mineral is garnet, omphacite is green and there is some white quartz.(credit: Kevin Walsh via Wikipedia) Work on Neanderthal genomes continues, as expected. The latest news comes from remains of a Croatian female, whose genome has been determined by a team led by members of the Max Planck Institute for Evolutionary Anthropology in Leipzig (Prüfer, K. and 35 others 2017. A high-coverage Neandertal genome from Vindija Cave in Croatia. Science, online; doi:10.1126/science.aao1887). Her full genome is of higher quality than those previously published for Neanderthals. Dated at around 52 ka, her genetics is likely to be closer to those who mated with the ancestors of modern Eurasians. Kay Prüfer and his colleagues suggest that Neanderthals passed on to modern Eurasians genes associated with plasma levels of LDL cholesterol and vitamin D (mainly produced by skin exposure to sunlight, Vitamin D is essential for healthy bones and supports the immune system), together with risk factors for eating disorders, accumulation of visceral fat, rheumatoid arthritis and schizophrenia. Two other interesting possibilities stem from reconsidering genetic data from other Neanderthals, in the light of the new Croatian analysis. Ancestors of an older Neanderthal (122 ka) from the Altai region of Siberia had interbred with genetically modern humans as long ago as 130 ka. Yet the genomes of the Altai and Croatian Neanderthals are surprisingly similar, suggesting that both lived in isolated small groups around three thousand strong (Gibbons, A. 2017. Neanderthal genome reveals greater legacy in the living. Science, v. 358 p. 21).

Also published on-line by Science is a study of the genomes of 7 individual anatomically modern humans from KwaZulu-Natal in South Africa (Schlebusch, C.M. and 11 others 2017. Southern African ancient genomes estimate modern human divergence to 350,000 to 260,000 years ago. Science online; doi: 10.1126/science.aao6266). They are three 2000 year-old hunter-gatherers (probably San) and four Iron Age farmers, similar to modern Bantu speakers, from 300 to 500 years ago. Although genomes from modern Khoe-San suggest up to 30% admixture from East Africans and Eurasians, comparison between the two ancient groups suggest a very old divergence among African anatomically modern human (AMH) populations, of the order of 350 to 260 ka ago. This is long before the remains from Ethiopia, widely accepted as the oldest known AMH (190 ka), but roughly the same as recently described fossils from Jebel Irhoud in Morocco (325 to 286 ka) reckoned to be early AMH. The Moroccan humans and now the genetic analysis from much more recent South African skeletons point to a pan-African early evolution of modern people rather than some kind of ‘cradle of humanity’.

More ancient AMH hunter-gatherers (~28 to 30 ka) occur at Sunghir, about 200 km east of Moscow, a settlement that includes several burials – one of which contained a boy and a girl – many with abundant, ornate grave goods. It seems likely that all the interred individuals were related and so an excellent target for DNA analysis. Four individuals with roughly the same 14C age did yield enough for genome sequencing (Sikora, M. and 26 others 2017. Science, online; doi: 10.1126/science.aao1807). It turned out from their mtDNA that none were more closely related than first-cousins or great-grandchildren. The data suggested a relatively small breeding population (~300) that avoided inbreeding and its often negative consequences, possibly through exogamy (a wide mating network) as practiced by living hunter-gatherers. Remarkably, the data also hinted at relationship with earlier (36 ka) individuals from Kostenki about 300 km to the south-west. DNA from several Siberian Neanderthal individuals do suggest that inbreeding had been an issue. Had it been widespread among Neanderthals – risky to infer from such scanty information – that may account for their lack of competitiveness with AMH and eventual demise.