Impacts increased at the end of the Palaeozoic

Because it is so geologically active the Earth progressively erases signs of asteroid and comet impacts, by erosion, burial or even subduction in the case of the oceanic record. As a result, the number of known craters decreases with age. To judge the influence of violent extraterrestrial events in the past geologists therefore rely on secondary outcomes of such collisions, such as the occasional presence in the sedimentary record of shocked quartz grains, glassy spherules and geochemical anomalies of rare elements. The Moon, on the other hand, is so geologically sluggish that its surface preserves many of the large magnitude impacts during its history, except for those wiped out by later such events. For instance, a sizeable proportion of the lunar surface comprises its dark maria, which are flood basalts generated by gigantic impacts around 4 billion years ago. Older impacts can only be detected in its rugged, pale highland terrains, and they have been partially wiped out by later impact craters. The Moon’s surface therefore preserves the most complete record of the flux and sizes of objects that have crossed its orbit shared with the Earth.

The Earth presents a target thirteen times bigger than the cross sectional area of the Moon so it must have received 13 times more impacts in their joint history.  Being about 81 times as massive as the Moon its stronger gravitational pull will have attracted yet more and all of them would have taken place at higher speeds. The lunar samples returned by the Apollo Missions have yielded varying ages for impact-glass spherules so that crater counts combined with evidence for their relative ages have been calibrated to some extent to give an idea of the bombardment history for the Earth Moon System. Until recently this was supposed to have tailed off exponentially since the Late Heavy Bombardment between 4.0 to 3.8 billion years ago. But the dating of the lunar record using radiometric ages of the small number of returned samples is inevitably extremely fuzzy. A team of planetary scientists from Canada, the US and Britain has developed a new approach to dating individual crater using image data from NASA’s Lunar Reconnaissance Orbiter (LRO) launched in 2009 (Mazrouei, S. et al. 2019. Earth and Moon impact flux increased at the end of the Paleozoic. Science, v. 363, p. 253-257; DOI: 10.1126/science.aar4058).

The method that they devised is, curiously, based on thermal imagery from the LRO’s Diviner instrument which records the Moon’s surface temperature. Comparison of day- and night-time temperatures produces a measure of surface materials’ ability to retain heat known as thermal inertia. A material with high thermal inertia stays warmer for longer at night. When a crater forms it partly fills with rock fragments excavated by the impact. When fresh these are full of large blocks of rock that were too massive to be blasted away. But these blocks are exposed to bombardment by lesser projectiles for the lifetime of the crater, which steadily reduces them to smaller fragments and eventually dust. Blocks of solid rock retain significantly more solar heat than do gravelly to dust-sized materials:  thermal inertia of the crater floor therefore decreases steadily with age.

As well as day- and night thermal data provided by the Diviner instrument, from which thermal inertia values are calculated, the LRO deploys two cameras that capture black and white images of the surface in the visible range, with a resolution of about a metre. They enable the blockiness of crater floors to be estimated. Sara Mazrouei and colleagues measured blockiness and thermal inertia of the floors of 111 craters more than 10 km across, ages of nine of which had been modelled independently using counts of smaller craters that subsequently accumulated on their floors shown by even finer resolution images from the Japanese Kaguya orbiter. Their results are surprising. About 290 Ma ago the rate of large impacts on the Moon increased by a factor of 2.6. This might explain why the Neoproterozoic and Palaeozoic Eras are deficient in terrestrial craters. Another inference from the results is that the number of objects in Earth-crossing orbits suddenly increased at the end of the Carboniferous. Maybe that resulted from an episode of collisions and break-up of large bodies in the Asteroid Belt or, perhaps, some kind of gravitational perturbation by Jupiter. The age-distribution of large craters on Earth is no help because of their ephemeral nature. Moreover, apart from Chicxulub that is bang on the K-Pg boundary, there is little evidence of an increase in impact-driven mass extinctions in the Mesozoic and Cenozoic. Nor for that matter did igneous activity or sediment deposition undergo any sudden changes. There are sediments that seem to have formed as a result of tsunami devastation, but none greater in magnitude than could have been caused by major earthquakes. Or … maybe geologists should have another look at the stratigraphic record.

Lunar gravity and the Orientale Basin

Mapping the Earth’s gravitational field once involved painstaking use of highly sensitive gravimeters at points on the surface, then interpolating values in the spaces between. How revealing maps produced in this way are depends on the spacing of the field sites, and that is still highly variable because of accessibility and how much money is available to carry out such a task in different areas. Space-borne methods have been around for decades.  One uses radar measurement of sea-surface height, which depends on the underlying gravitational field. The other deploys two satellites in tandem orbits (the US-German Aerospace Centre Gravity Recovery and Climate Experiment – GRACE), the distance between them – measureable using radar –  varying along each orbit according to variations in the Earth’s gravity. Respectively, these methods have produced gravity maps of the ocean floor and estimates melting rates of ice caps and the amount of groundwater extraction from sedimentary basins. The problem with GRACE is that satellites need to avoid the Earth’s atmosphere by using orbits hundreds of kilometres above the surface, otherwise drag soon brings them down. So the resolution of the gravity maps that it produces is too coarse (about 270 km) for most useful applications. If a world has no atmosphere, however, there is no such limit on orbital altitude, other than surface topography. A similar tandem-system to GRACE has been orbiting the Moon at 55 km since 2011. The Gravity Recovery and Interior Laboratory (GRAIL) mission has produced full coverage of lunar gravity at a resolution of 20 km. In a later phase of operation, GRAIL has been skimming the tops of the highest mountains on the Moon at an average altitude of 6 km; close enough to give a resolution of between 3 and 5 km.

The Mare Orientale basin on the Moon. (credit: Wikipedia)

This capacity has given a completely new take on lunar near-surface structure, about as good as that provided by conventional gravity mapping for parts of the Earth. The first pay-off has been for the best preserved major impact feature on the lunar surface: the Orientale basin that formed at the end of the Late Heavy Bombardment of the Solar System, around 3.8 billion years ago. The ~400 km diameter Orientale basin is at the western border of the moon’s disk visible from Earth, and looks like a gigantic bullseye. Its central crater, floored by dark-coloured basalt melted from the mantle by the power of the impact, is surrounded by three concentric rings extending to 900 km across; a feature seen partially preserved around even larger lunar maria. The structure of such giant ringed basins – also seen on other bodies in the Solar System – has been something of a puzzle since their first recognition on the Moon. A popular view has been that they are akin to the rippling produced dropping a pebble in water, albeit preserved in now solid rock. 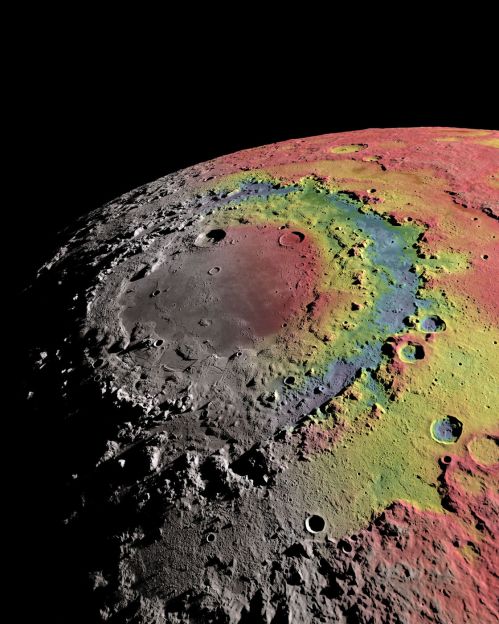 The Orientale basin superimposed by the strength of the moon’s gravity field. Areas shaded in red have higher gravity, while areas in blue have the least gravity. (Credit: Ernest Wright, NASA/GSFC Scientific Visualization Studio)

GRAIL has allowed planetary scientists to model a detailed cross section through the lunar crust (Zuber, M.T. and 27 others, 2016. Gravity field of the Orientale basin from the Gravity Recovery and Interior Laboratory Mission. Science, v. 354, p. 438-441). The 40 km thick anorthositic (feldspar-rich) lunar crust has vanished from beneath the central crater, which is above a great upwards bulge of the lunar mantle mantled by about 2 km of mare basalts. The shape of the crust-mantle boundary beneath the rings shows that it has been thickened by anorthositic debris flung out by the impact. But the rings seem to be controlled by huge faults that penetrate to the mantle: signs of 2-stage gravitational collapse of the edifice produced initially by the impact.